Go back to News
by kelsey 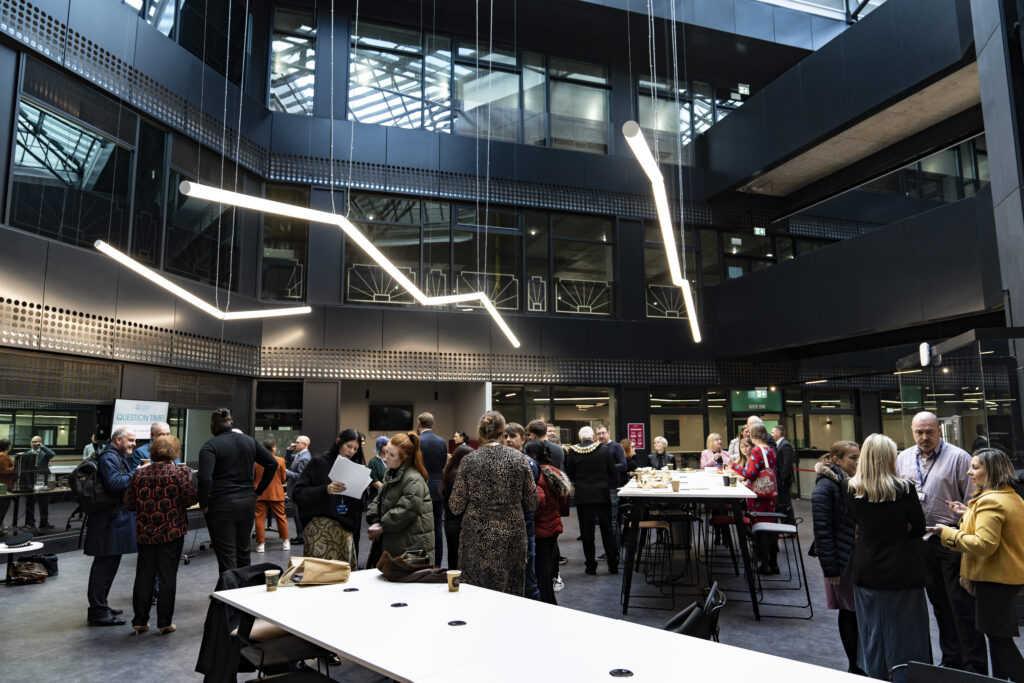 Trafford College Group had the pleasure of organising the 2022 Student Question Time event at the University Academy 92. This marvellous event gave TCG students the chance to converse with an impressive panel of political and business experts. The audience consisted of several Trafford College Group partners, as well as local dignitaries such as the Mayors of both Trafford and Stockport.

A select few students took to the floor to ask some insightful questions regarding the current economic, environmental, and social climates in the UK. Each question from the below topics has been listed with some of the key insights given by our expert and student panellists.

Meet the panel of experts:

Are trade unions using the cost-of-living crisis to advance their own political agendas and are mass strikes appropriate at this time? (Cost of living)

“I don’t think striking is a very good approach generally, it is a sign of breakdown in negotiations. If you start giving this inflation busting pay rises to millions of people across the public sector, then you actually feed inflation, so it is not a good time to be pushing for these pay rises.”

“The function that trade unions focus on is defending the interests of their members, that’s why I’m a member of a trade union and that is what we are seeing now. It is not a political agenda we’re seeing. I’m a very proud trade unionist.”

“I don’t believe rail workers shouldn’t strike but we need to understand how strikes affect our environmental footprint. For example, if my company can’t transport our 1 million tonnes of waste via trainlines due to strikes, we’ll have to use thousands of extra lorries, generating much more carbon dioxide.”

“We’re working in a system that for the last 10-12 years has seen a real turn to pay cuts, so it is necessary for nurses to go on strike if they feel their agenda is important.”

“Bills have doubled the past 2 years and if our public sector workers can’t afford to heat their homes and have to visit food banks it shows you how the Government is really treating them.”

“I don’t think we have reached the point of mass strikes just yet. Public sector workers are experiencing hardships due to the cost-of-living crisis, therefore engaging in strike activities but only as a last resort.”

Is it right that oil and gas companies are making record profits during the time of a climate emergency and cost of living crisis?

“It is right that the gas and oil companies pay additional taxes on their excessive profits, profits from the financial circumstances that we’re exceptionally operating in. I would like to point out it did take a long time for the Government to come round to the idea of these windfall taxes, something that Labour was proposing many months ago.”

“Of course, the oil and gas companies are paying significant additional taxation on those profits, and I think it is reasonable to do that on things which are genuine windfall profits. We don’t want to discourage investment in energy and recent crisis has showed we have had too much dependency on certain types of fuel.”

“We need to remember that not all companies who are producing energy are primarily power generators. We shouldn’t have excessive profits, but we need to understand the nuances of the industry.”

Is social media a useful tool or taking over the lives of young people?

“I speak to young people about this topic every day and ask them how they feel about social media and whether they consider it a positive or negative. The negative is that young people are seeing people on social media who are portraying a successful lifestyle and it makes them believe the larger the following you have online the more successful you’ll be but that is not true. What young people don’t see is the mental impact that having an online presence can have.”

“Despite being very active on social media I don’t think it is a good thing because our lives revolve around seeing what other people are doing.”

“If over half the global population are on social media sites then of course there must be some benefits. For example, it is a great way for young people to make friends, but I think people can take posting a step too far, particularly by heavily editing photographs.”

With additional pressures on council budgets – post covid, are local services equipped to deal with the increase in mental ill health diagnosis in young people?

“Every year we see these budgets get cut, especially in education but I think there are external people and role models of young people who can really make a difference. Charities such as Young Minds are the ones we need to support and encourage. Never be afraid to tell someone you are not mentally well.”

Our new PM is from an ethnic minority heritage. Does this have any impact on race equality in the UK?

“It’s good because it is more representative of British society and going forward the Government generally needs to become more representative. The more the merrier and if that means we have to change the way we encourage you to stand for these roles then we need to do that. We need more aspirational heroes who show that these high up roles are accessible.”

“I think it definitely will have an impact on ethnic minorities. Some people will think it’s great to have someone from our background in there who can really make a difference. If you ask me personally, I think it is probably about time that we mixed it up and had someone of colour in with that level of power. I think that having a difference face in that role will open up certain doors for people.”

“I think it says that you can be what you can see. It’s fantastic that we have more ethnic minority politicians but there is still a huge way to go in terms of the representative nature of our system.”

The Trafford College Group want to thank all those who participated in this brilliant event. It gave our college students the opportunity to express their insightful opinions and put their political and environmental knowledge to practice. We hope to continue Student Question Time each year! Follow the link for more college news and updates.